Empowering Students To Take A Stand Against Bullying 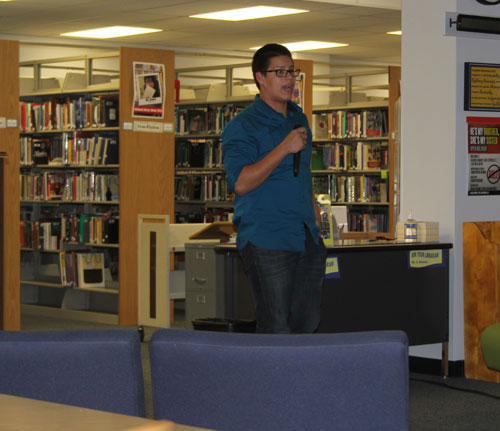 Sophomore and Open mic host Isaiah Negron shares some of his own poetry.

Here at Leyden we have strong intellectual beings ready to share stories in unique forms that very few people have the courage to do.

On November 7th, East Leyden hosted the He’s My Brother, She’s My Sister open mic in the Nardini Library from 2:30-4:00 p.m.

The event was spearheaded by East Leyden sophomore  Isaiah Negron and freshman Krystian Misiewicz who started the event on their own accord as a response to a science project that developed into an open mic event.

Christopher Negron, the featured motivational guest speaker and Negron’s father, had encouraging words for students who are being bullied as he had a past with bullying when growing up in the rough streets of Chicago.

Included in the open mic event were numerous other speakers that attend Leyden, and each told their own story in various poetic styles.

A former student, Jeremy Mercado, joined in the event and delivered a piece that emphasized the importance of having universal love and such.

Overall, the event was a success as students watched and heard the emotion through poems in a raw and up close form that really is a sight to behold.