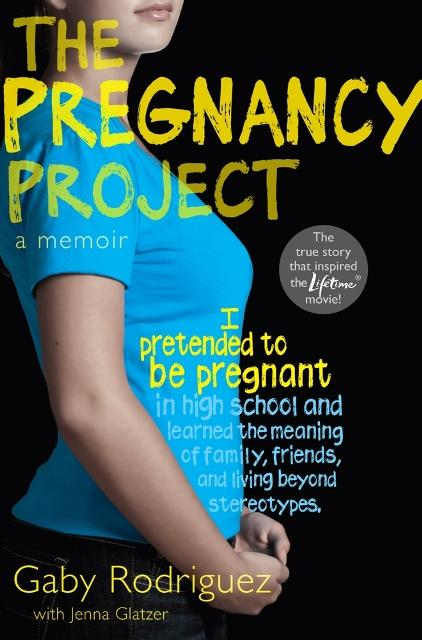 “The Pregnancy Project” by Jenna Glatzer is a memoir based off of the very unfortunate, yet worthwhile events of teen mom Gaby Rodriguez’s life. Having written memoirs about several well-known people, Glatzer really took on a challenge agreeing to portray Gaby’s story in a single 215 page book. Born to a single mother with a total of 8 children, Rodriguez learned to look past her family’s bad reputation to gain a better one for herself. All her life people told her, “You’re going to end up just like your mother and sisters,” but Gaby knew what she wanted out of life and it was much more than the snobby side comments she received from strangers at school. As part of the top 5% of her class, as well as a result of the pressure from everyone around her regarding the pregnancy subject, Rodriguez decided to pick a daring choice for her senior project. She engaged in the so called “Pregnancy Project” where she would pretend to be pregnant for the majority of her senior year to see just what it was like for not only the people in her family, but for teens all around the world.

Gaby Rodriguez is a very strong, smart-minded teen who took a leap of faith risking her reputation and grade for her project. Picking a subject very near and dear to her heart made her more involved and engaged in her project’s outcome. She is a strong individual, and I think many people can learn a valuable lesson from this memoir written about her life before and after her project. Although this book is not written for higher level readers, I still found it to be quite enjoyable. This book can be purchased nearly anywhere, and I would mostly recommend it to young teen girls so they can see what struggle girls have to go through, and how they overcome them. The book teaches a valuable lesson to never succumb to stereotypes about you and always believe in yourself, which pulls at the heartstrings of many of our generation’s teens today.