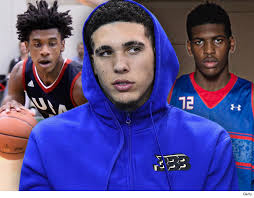 The UCLA basketball team returns to California from China, while freshman LiAngelo Ball, a player on the team was left behind in China with two other teammates; Cody Riley and Jalen Hill. Sources say Ball and his teammates were arrested because of suspicion of shoplifting in a high-end shopping center. Accusations were that they have

stolen Louis Vuitton sunglasses, also shoplifting from three other stores. The UCLA boys basketball team had a game against Georgia Tech three days after the accusation, which resulted in Ball, Riley, and Hill to not participate in the game because they were on house arrest in China until the situation was figured out.

According to ESPN, there is camera surveillance footage of the 3 shoplifting in the high-end shopping centers. If

Trump with XI of China

the 3 were convicted of  grand larceny, they could face at least three to ten years in jail. Grand Larceny is theft of personal property having a value above a legally specified amount. Thanks to Donald Trump, the three boys were no longer detained. Trump had asked China to drop the case and let the boys free, which China agreed and the boys are now back home in LA.

What does this mean for their place on the UCLA team? The three players now are starting tough since it is the opening of the season. Without the 3 players the UCLA team will have a tough start since Ball was a three star recruit, Riley and Hill were 4 star recruits and Riley was also in the top 50 high school recruited. People are worried UCLA won’t be as good without them, resulting in this being a big issue. The three will soon be playing again once they are allowed to. The charges against the three players have been reduced, and until the 3 are able to participate again, UCLA is going to have a tough time. 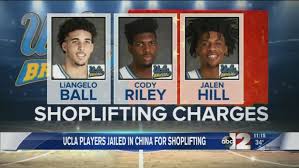