For Some Leyden Athletes Recognition Is Hard To Come By 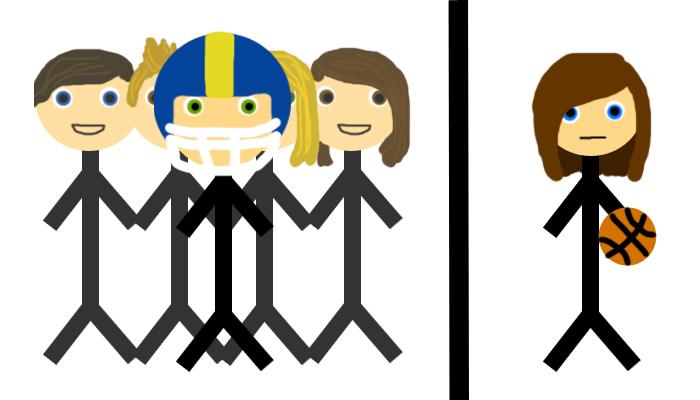 The most recognizable sports in high school are arguably boys football, boys basketball, and boys baseball.

These are the sports that seem to get the most promotion, and audience attendance is usually really strong at these sporting events.

Notice that all of these sports are boys. Girls sports, along with some of the smaller boys sports, seem to get pushed to the side.

Student Activities Director Dominick Manola stated, “he was slated to attend a couple of basketball events, but unfortunately he came ill. Even the “Blue man” gets sick.”

Senior Tim Hester, who was on this year’s varsity football team, noted that football at Leyden was covered by “all the newspapers, and [we] were in the morning announcements every Thursday.”

Even professional news reporters and writers seem to focus their praise on professional boys football, basketball, and baseball teams.

For example the NBA is all over the news and internet, yet you rarely hear anything about the WNBA.

If professional girls sports are struggling to get recognition, understandably our student girl athletes are fighting against bigger odds.

Leyden girls basketball team’s past record has not been the greatest, but you can’t judge a team by its record alone.

Varsity girls basketball guard and senior Stephanie Muralles acknowledges the impact that little to no recognition has had on her: “I’m used to no recognition, it has been like this for a long time.”

And come game day, it’s tough to get yourself worked up for a small crowd.

“There is no excitement in the gym, it feels like going to practice,” she added.

Boys cross country has not had one article in any newspaper or online article on their success this year despite them taking third in conference as a team and qualifying for the Sectional Championship meet.

Several girls and boys sports have had many successes this year and in years past, yet not a lot of people outside of those programs know about them.

Conrad added, “The girls bowling team is one of our best teams in recent time taking 6th place last year and having a girl take third in state.”

Some Leyden sports like basketball, football, and wrestling have been televised or streamed online.

“I believe the very first game is football I am pretty sure, or wrestling. Probably because of a large crowd and looks good and the most people follow and want to watch,” Conrad said.

Other sports like tennis, badminton, cross country, bowling, golf, etc do not get these honors unless it is a state playoff tournament.

The girls bowling team’s state meet was streamed online via the IHSA website.

Conrad added, “The public likes winners. If you want bigger crowds in the stadiums or stands you need to win more.”

Hopefully, in the future, things will change in the world of sports media for these lesser known student athletes.