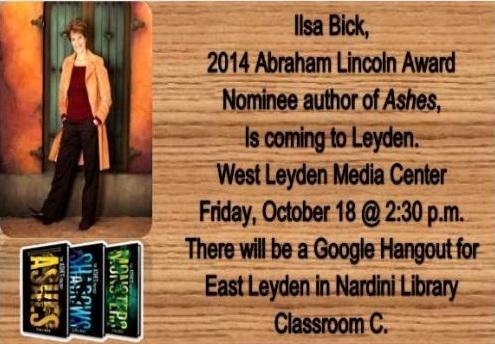 The Leyden Media centers will be hosting an opportunity to meet one of this year’s Abraham Lincoln Award nominees, Ilsa Bick, at West Leyden on October 18 at 2:30 p.m. with a Google Hangout for students at East.

During Ilsa Bick’s appearance she will provide the audience with information about herself along with some of her most famous works.

The writer for Star Trek and other thrilling novels will give readers at Leyden an exciting time to look forward to. According to published sources, before Ms. Bick became a successful author, “she was a child/adolescent and forensic psychiatrist. She also holds a degree in literature and film studies, and has presented and written widely on applied psychoanalysis and film.” Ms. Bick has written for Star Trek multiple times.

Besides Ms. Bick’s appearance at West Leyden, there will be a Google Hangout at East Leyden in Classroom C. Google hangout is a new and exciting feature here at Leyden where students and teachers will be able to video chat with Ms. Bick.

Leyden students gets the opportunity to listen to Ilsa Bick’s story and afterwards there will be time for questions and answers.

The Abe Lincoln Award month is very big at Leyden. Every year, high school librarians, teachers, public librarians, and students determine a master list of twenty-two books that will be on the Abraham Lincoln’s nominee list. Students will get the chance to read these books and once they vote on the best book, the title with the high number of student votes is Abraham Lincoln’s Award winner.

The Abe Lincoln program was designed to encourage students all over the nation to read for fun and to continue to read for their entire lifetime.

There is no cost or registration. Students who are interested can go to West Leyden or East Leyden to meet and listen to Ms. Bick.