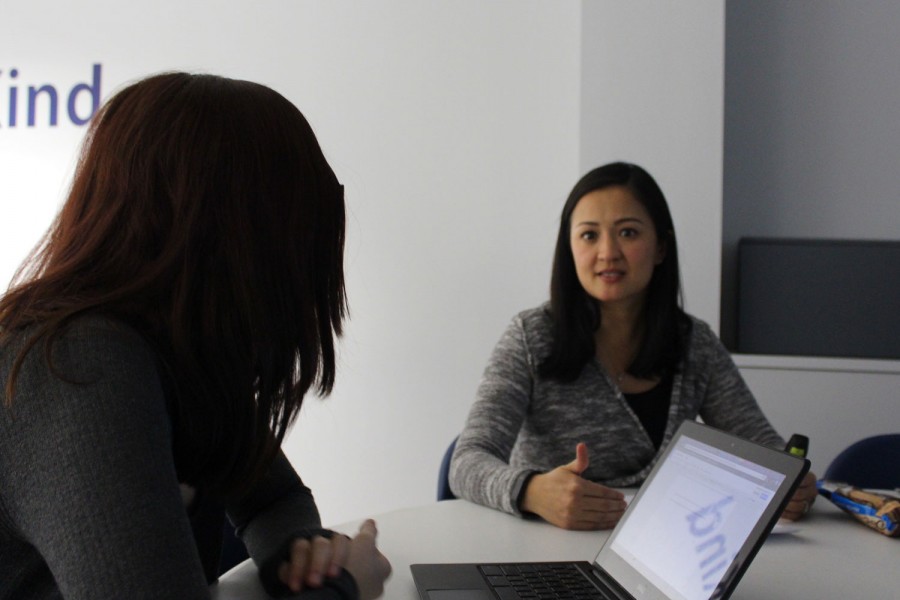 The first thing Ms. Karen Ritter, Assistant Principal for Teaching and Learning, asked me when I sat down was “What do you do to manage stress?” And that was the moment I realized that I, and most students, do absolutely nothing to handle stress and anxiety. And I wasn’t the only one to notice. Ms. Ritter has started to implement a more mindful environment at Leyden, and she’s started with herself and the teachers.

Yesterday, Ms. Ritter hosted a “Lunch-n-Learn for teachers called “Mindfulness for Students” where she taught strategies that teachers can use to help students be more mindful and reduce stress. Mindfulness, as defined by Ms. Ritter, is “not like a fad or an activity. It’s a way of life. It’s a behavior. It’s the way that you lead your life. It’s a mindset, and it’s really just about being aware of your own body, your own self, [and] being aware of others around you.” Being mindful is about having empathy and being aware of the world around you.

And a lot of people forget that they can have this kind of mindset. A lot of the time, we are constantly thinking about something. Whether it’s the essay due tomorrow, or sending out that important e-mail, or paying the electric bill, most of us have constant mind chatter which Ms. Ritter calls a “monkey mind.” Having a monkey mind refers to an old Buddhist term that means one is unsettled, restless, uncontrollable, and inconstant. A lot like having a bunch of monkeys endlessly jumping and screeching around in your head. Basically, it’s what keeps you up at night when you can’t fall asleep and what you think of every time you have a couple of seconds of brain free time.

Ms. Ritter explains that releasing stress and becoming more mindful is as easy as unplugging. She believes that “there is value in slowing down. When you sleep your body slows down. It rejuvenates itself.” She compares it to an internet modem, explaining that when the internet is down, all you usually need to do is unplug it and plug it back in after a couple of minutes. One of her favorite quotations is from Anne Lamott: “Almost everything will work again if you unplug it for a few minutes, including you.”

And a lot of us are never unplugged. Ms. Ritter sees it every time she goes down to study hall. “I just see kids on their computers. They’re not relaxing, and that’s the perfect time I think. Even at lunch, when they’re not talking to friends, they’re on their computers.” And there have been multiple studies that have shown what mindfulness can do in school. “There are studies that show that if you meditate before an exam, you perform better. There are studies that show attendance increases, [and] discipline decreases with schools that have mindfulness programs,” says Ms. Ritter. One study done by professors at Exeter and Cambridge University showed that after implementing a mindfulness curriculum, they found “significant impacts on depression, stress, and well-being.”

At the lunch-n-learn, Ms. Ritter taught teachers and administrators that there are five literacies of mindful learning. There is somatic literacy, which is feeling present in your body. Then cognitive literacy, which is strengthening one’s attention and thought processes. Followed by emotional literacy, which is developing self-regulation. And then the final two are social literacy and ecological literacy. Social literacy is “the concept of teaching kindness, acceptance, and empathy. Really thinking about other people [and] putting yourself in their shoes,” says Ms. Ritter, “and I think that’s important for teachers to do with students.”

Ms. Ritter explained that not just every student, but everyone, has some sort of personal conflict or struggle, and that we’re all dealing with something internally. “It’s really important to empathize with people and know where they’re coming from in certain situations,” says Ms. Ritter, “and if we don’t get to know students or other people, we won’t know why they react a certain way to certain things.”

Leyden has already started to be more mindful. Teachers can come in before school for morning meditation and this year, we even have a meditation club that meets Wednesdays during period 11 in library classroom c. During final exam week, there will even be meditation and yoga sessions run by Ms. Curley and Ms. Jablonska to ease students’ stress during final exams.