A Sandwich To Die For? 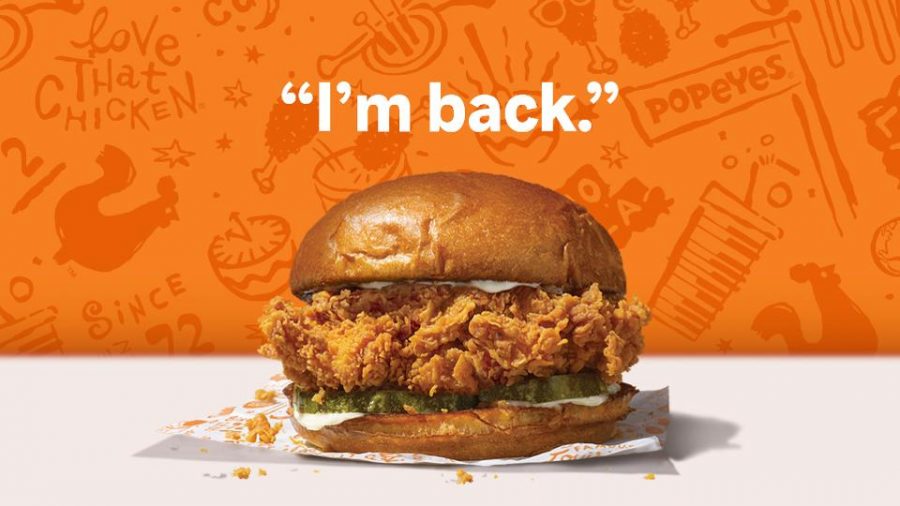 The famous Popeyes chicken sandwich is back, bringing madness, mobs and near-death experiences. Back in late August, Popeyes announced the launch of a new chicken sandwich which came in regular and spicy flavors. It had been rumored that the organization had been working on the sandwich since 2016 putting the sandwich’s hype at an all-time high. However, their two month supply only lasted two weeks thanks to the immediate attention the sandwich drew over social media, so much so that people were rushing to their nearest popeyes and waiting up to 2 hours just for this chicken sandwich!

Due to the shortage of sandwiches, Popeyes needed to take it off the menu for about two months to be able to recollect and bring back the sandwich permanently. The sandwich returned on Sunday, November 3, which led many to believe its launch was a jab at popular competitor, Chick FIl A, also known for its chicken sandwiches, and for being closed on Sundays. “It was really good marketing on their part,” said Allen Muniz, a junior here at East Leyden. However, with the return of the sandwich came the return of the controversy and violence that followed.

One day after launch, Kevin Davis of Oxon Hills, Maryland was stabbed outside of a Popeyes by Ricoh McClain after McClain confronted Davis for cutting in line for the sandwich. There have been numerous altercations posted on social media including Popeyes employee, 29-year-old Deriance Hughes bodyslamming a 55-year-old grandmother in the parking lot of a Tennessee Popeyes. The now-viral video took place after an argument broke out in the restaurant and the woman called Hughes by a racial slur resulting in her being kicked out and then followed out by Hughes.

After hearing about the craze and chaos people were enduring to get this chicken sandwich, a number of Leyden students knew they had to try it. Muniz stated that after a 30-minute wait he was disappointed and would “rate the sandwich a seven out of ten” because he has “definitely eaten better sandwiches at other places.” Muniz also said the sandwich, that has gained an abundance of media attention, “did not live up to its expectations. I don’t think that the chicken sandwich was worth the hype, and was definitely not worth someone losing their life over.”