Throw On Your Helmets Boys and Girls 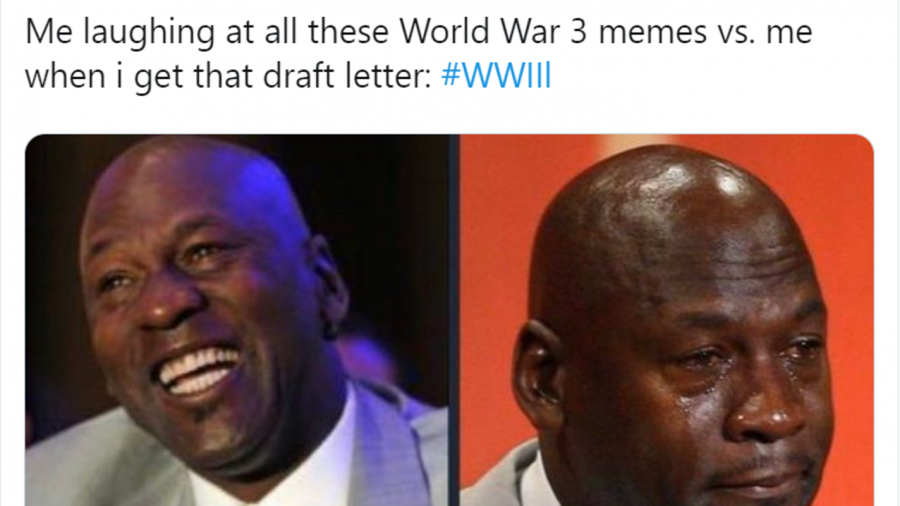 As World War III comes closer everyday, our generation has to do something to lighten the mood. All over social media, pre-teens to young adults create videos and comments about this upcoming event that might affect our lives. Each person sees them in a different angle and copes with it in different ways.

One of these coping methods was tik tok, a video-sharing social networking service, where teenagers are “apparently” getting drafted into the military for World War III. To many people think this is humorous and a way comforting tool. “People use humor as a defense mechanism. We laugh when we are uncomfortable for example, giggling during sex-ed class,” psychology teacher, Patrick Winstead, says. “So if there’s an uncomfortable news story about war, or poverty, or oppression, rather than feeling the emotions or vulnerability that come with it, we make jokes.”

Students in Leyden have expressed the same idea that Mr. Winstead explains. Over the seven people that were interviewed, shared the idea that humor is a sort of comfort for uneasy events. They shared the same opinion on coping. “I didn’t think they were insulting. I thought they were more trying to cope with being scared,” Lorena Irvin  said. “I use humor when I’m sad, mad, angry or stuff that avoids the problem.” Another student, Filip Klich, says, “To cope with our stresses, we’re gonna make memes and laugh about things,” He also mentions, “Sometimes people have to understand that a joke is just a joke,”

“When I saw them [World War III memes] on the internet, it upset me,” Delanie Lopez expressed. Students who have family and friends in the military share a slightly altered view. “I have a family that has served in the military, and I feel it’s disrespectful. These people really serve our country to protect us.” Although she does admit, “I’m not gonna lie, some of them are kind of funny,” but she presses on, “,but if you really take a look at it, it’s not that funny. I know it’s like a light of the situation, but in some situations we shouldn’t make a joke out of it.” Similarly, Jasmin Carrera says, “I think they’re funny but like to a certain point,” Adding in,”I have friends who are in the military, and they’ll make comments on it and they don’t either agree or they’ll say, that’s not even how it is or realistically that’s not how it’s gonna happen.”

The idea of being drafted into war is 100% not happening. Drafting was banned in 1973 to become an all-volunteer military. Along with the idea of an actual war breaking out, probably not likeable. A world war would need to consist of multiple countries against or allied with each other, which currently the majority of countries do not want to. You can’t have a world war if there aren’t many participating. Even though war is a possibility, a world war is not.