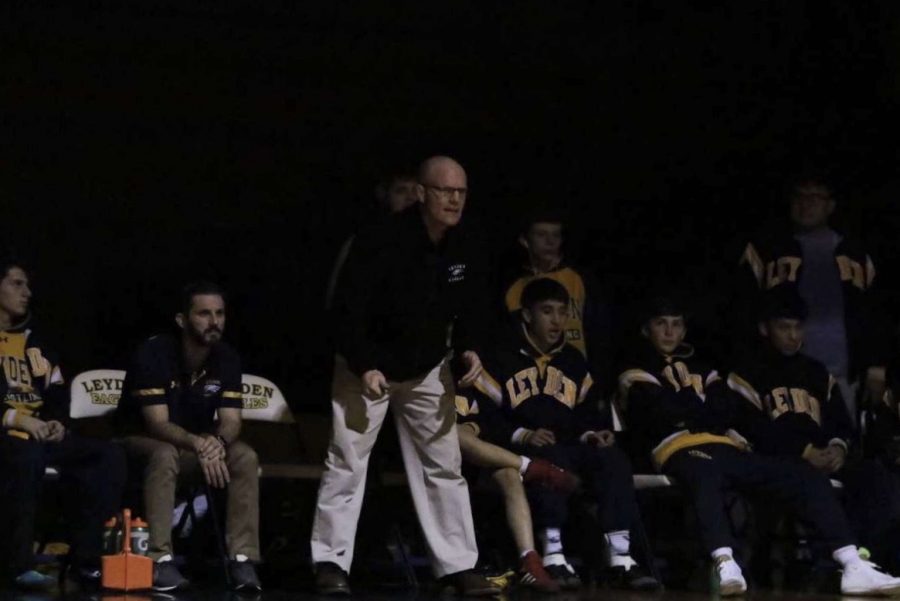 Coach Kading yelling out words of encouragement during a meet.

As wrestlers are training for the upcoming season Coach Kading Tells us what he’s looking forward to seeing in his “kids”. Coach Kading, the head wrestling coach, took over the position in 2016. Since then he watched the team grow stronger and better. He recalls having a sentimental value with Jimmy Lonigro and Daniel Uribe because they were his first 4-year wrestlers that he had the privilege of being able to see their development from freshman year all the way through senior year. He is “excited to see how they end up and if they accomplish everything they want to accomplish”. Coach Kading has played a big impact on their time at Leyden, when asked about who Coach Kading really is, many say he’s a mentor, a friend and a role model. “He always wants us to have fun when we compete because we won’t always be able to,” says Jimmy Lonigro as he recalls what happened after a tough loss at sectionals that had left the team in bad spirits “He came out of nowhere and tackled one of the wrestlers into the snow”. He cares about his team a lot, on and off the mat.

“I’m excited to work and get better with this team,” says Senior wrestler, Daniel Uribe. As the season creeps closer many wrestlers, including Daniel, spend their Tuesdays and Thursday getting comfortable with the mat once again. “We’re excited to wrestle and win against Addison Trail High School because they are our rivals,” said Jimmy Lonigro when asked what school he’s looking forward to wrestling against most. Leyden had lost to the Trail Blazers for the past three years, but this season they’re hoping to change that.

Coach Kading and Daniel Uribe during Open MatsOpen Mats have begun and are a great opportunity for wrestlers to start conditioning for the season. They are every Tuesday and Thursday in the wrestling room from 3-4 pm. The first practice is November 5th and the first meet will be away at Rolling Meadows on November 26th. Some great ways to start preparing for the season are by running every day to increase your endurance, weight lifting to gain muscular strength, and stretching for increased flexibility. So come on down to Wrestling room, and get ready for the 2019-2020 season.