Harmony, Havoc, or Hope: How Will Your Team Respond?

As the NFL and NBA get ransacked with injuries, the three ways to play through it is to climb, fall, or hold on until next year. 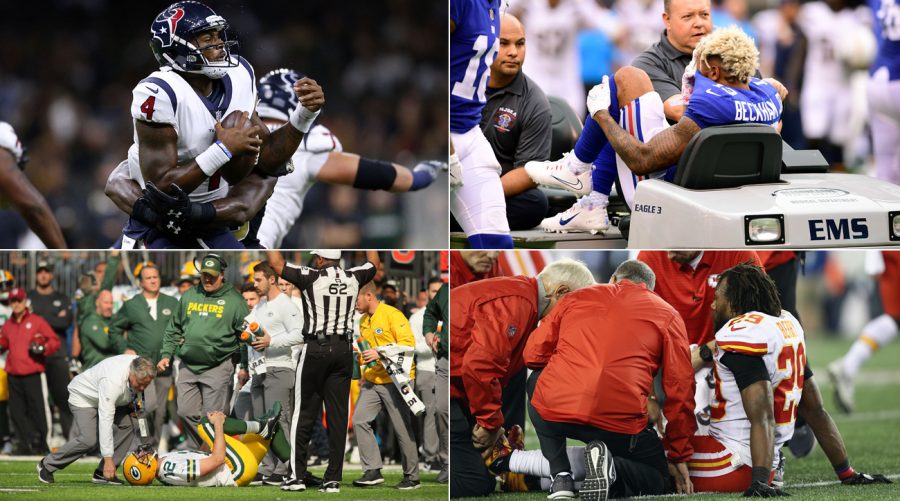 The days of rooting for underdogs has just about come to an end in the sports world as casual and committed sports fans alike dedicate time to watching and following superstar athletes. While the past 5 years have been jam packed with thrilling performances by these stars, the 2017 calendar year has taken its toll on the industry through injuries. Yes, there are a bunch of injuries every year, and a couple are these athletes who follow it up by winning Comeback Player the next year, but this year has proved different. If you tuned in on any of the three NFL games on Thanksgiving, each of those teams has a superstar on injured reserve (out for season), with the biggest name being Rookie of the Year front runner, RB Dalvin cook from the Vikings. This isn’t to mention Black Friday and almost every NBA team playing at least one star down.

Injury bugs have swept teams and, very few times, entire leagues. But this is beyond just a bug, an epidemic to say the least. Of the 62 teams in the NFL and NBA, the Oklahoma City Thunder (NBA) remain the only team to not have an all-star injured. And the scariest part is that the other 61 teams, which some have multiple stars out, have injuries that will last months, and, the majority, the season!

While losing your best players may cause teams to derail, it may also force hardwork and dedication to shine through. And, as this year has gone, both are being proven. The easiest example of a success story is the Boston Celtics. On one of the first few possessions of the 2017 Season, newly acquired all-star Gordon Hayward suffered a broken leg that will sideline him until April 7th. “When I saw the injury I assumed it would rock their chances of winning the title,” Miguel Cooper, NBA Fan, said, “but after seeing how they responded, specifically Kyrie, they seem like they will dethrone Cleveland” As Cooper noted, the Celtics took this injury and used it as fuel, driving to the top of the league helped by a 17 game win streak and a new MVP front runner in Kyrie Irving.

Some teams, however, have been the dark side of the mood to the Celtics. Take the NFL’s Indianapolis Colts as proof. After going 8-8 last year without starting QB Andrew Luck, the Colts once again lost their star passer for season and even lost their top defensive back Vontae Davis.  Although the Colts grabbed a viable QB in Jacoby Brissett, the loss of the two best players, and two biggest leaders, have left the Colts dazed and confused at 3-7 (at the time of this article being written.)

While the Celtics and Colts are polarized on their response to injury, a team that lies right in between is our very own Chicago Bears. Of all the teams who have suffered season ending injuries, the Bears top the list in quantity. With CB Kyle Fuller the only defensive player that was a starter in preseason still healthy, the Bears, who were expected to be bottom feeders regardless, now had to deal with an entire defense of backups and third stringers. Yet, as the Celtics did, the defense pulled together, working hard and as a team, and kept the Bears within striking distance in their 10 games. While 3-7 might scream failure, the team was projected to go 3-13 from the start, and the defense is not the one to blame. They rank 7/32 in overall defense and even WON a game for the offense when Eddie Jackson (a third string, rookie DB out of Alabama who was fresh off an ACL tear) scored two TDs on D against the Panthers in a 17-3 win. “The offense never plays good,” John Longo, my father and diehard Bears fan claims, “but the defense always busts their [behinds] and gets the job done. It doesn’t matter no one knows them, they just play ball.”

While 2017 has proven that sports are as dangerous as everyone already assumes, it has shown that injuries either cause harmony (Celtics), havoc (Colts), or hope (Bears.)